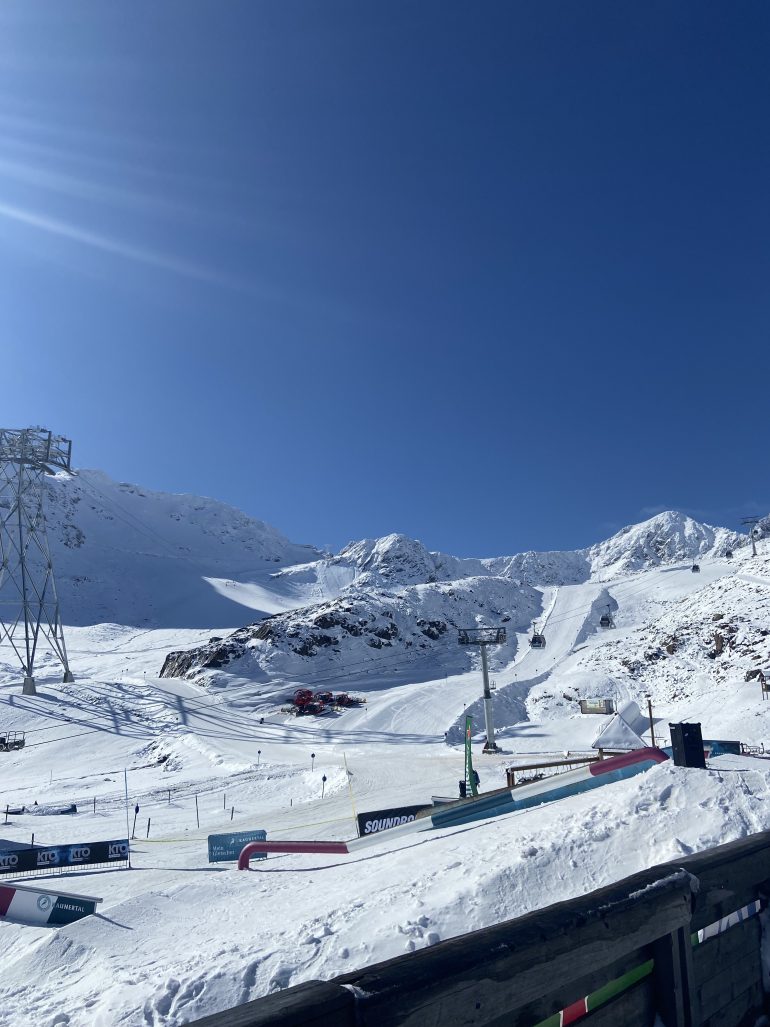 Arriving Friday, early morning on the toll road, time was foggy and no sun to see. But just passing the glacier lake I luckily saw once again the whole beauty of the Kaunertal. After the HOTZONE Opening, first weekend of October this was the second one for me and I was pretty exited to see all the familiar faces, who I didn’t see during the whole summer. Perhaps even longer, since the restriction took place on 15th of March in 2020 probably. Arriving on the parking lodge on top of the glacier route, I was pretty hyped to be back and start the season with all the homies and some of the go-shred FAMily MEMbers.

After enjoying the magnificent view I started to stray around to see who I meet.

I arrived just in time to witness the opener session with no one other than the DON himself, Michi Schatz. The Session was insane, not to forget that this is just the beginning of the season. I didn’t film the session, but you can find bangers from Kirschi, Stu, Michi, Ossi, FAM MEM Lorenz, just to name a few on there IG accounts, if you haven’t seen them yet.

During the whole weekend, we had the pleasure to be entertained by the one and only Henry Jackson and the DJ duo Mad Simon & Big Belly Boy. So adorable atmosphere guaranteed.

During the day I meet our FAMily MEMbers on and of snow, which makes me always happy. Cause having such bad ass dudes in the FAMily makes me always really happy and proud.

And then it happens! Out of a clear sky I run into two well known and well appreciated originals. They both love snowboarding, having a good time and drinking from time to time a little glass of sparkling wine. First I was not sure, if they really are those legends, but then it was crystal clear. Two OGs from the world famous Team Schwaben were life in person just in front of me. I was hyped. But seriously, what would KTO be without those legends.

Next stop was the test area and imagine who I meat. Some Salomon Snowboards rippers.

Just beside the Salomon booth on the bench, 3 divas from SHRED UNIT took a break from the scene and their fanboys for refreshing themselfs with an ORIGINAL SPEZI. Those girls are on fire and probably will reinvent women snowboarding in Tirol.

On my way to do some security researches, I mean never underestimate the potential of danger at Kaunertal, I meet the boss of team media.at, Flo Achenrainer. He’s one of those guys who makes you smile without saying something, cause he’s so unique. Thank you for this my friend.

Last but not least there were the two Gram brothers, who are also responsible for the snowpark at Kaunertal. Yes, you’re right. Schneestern is history. Now there’s Goffi, who equally runs Serfaus Snowpark taking care of the autumn and spring park on the Kaunertaler glacier. Congratulations brothas.

All in all a typical Kaunertaler Opening with a lot of laughs, a super setup, if you take in consideration that it was just the second weekend of October, some taken driving license by the police and a blue sky during the whole weekend.

I want to say a huge thank you to everybody involved and can’t wait to get more snow and start into wintertimes. After this, i drove safely home due to the new go-shred VAN provided by our the new mobility partner DOSENBERGER group.

For more recaps from the 36. Kaunertaler Opening, follow the link.

THX 4 reading and see you soon on the mountains. Chers, Martin