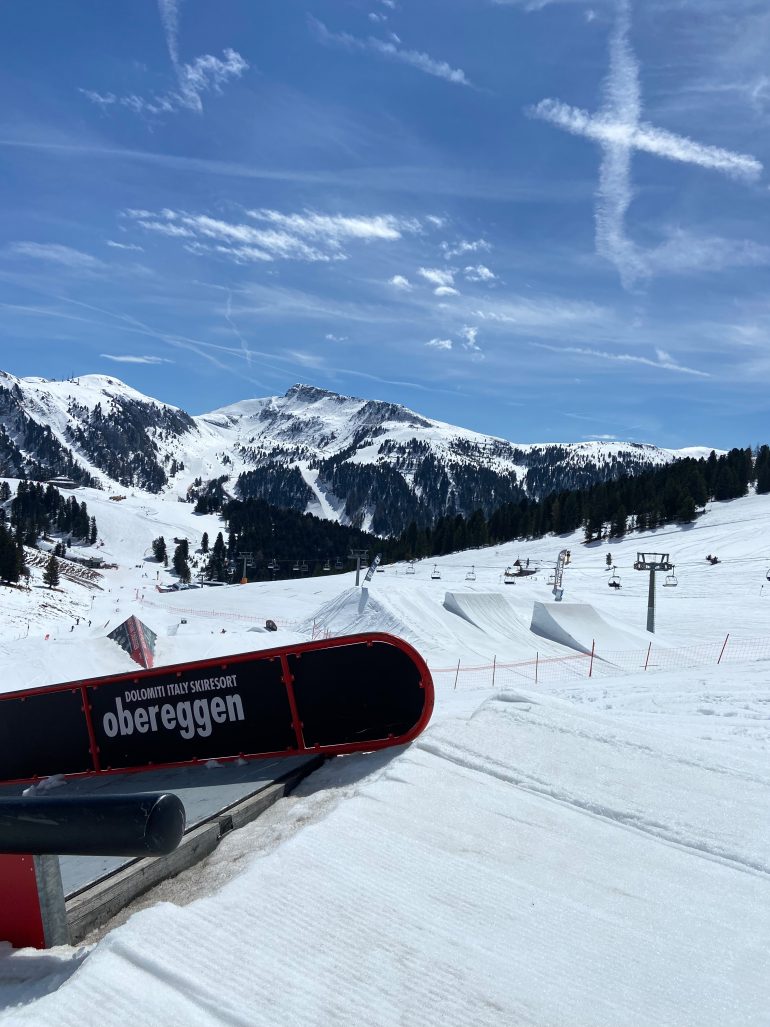 Step by the step winter is coming to an end and almost all go-shred events made it to the book of winter sport history. It was heartwarming to see all the happy people smiling all-round and having their best time during the competitions. Thank you to everybody involved. And now is the moment to take advantage of the free time.

Since a few years I regularly watch clips from all the great snowparks in South Tyrol. There are so many great parks (Seiser Alm, Kronplatz and Obereggen, e.g. ) who made me want go there and check it out. Last week I took my phone and called the park management from Obereggen to see if everything is open and if it’s a good time to visit the resort and shredding the park. I talked to Martin from F-Tech and found out that we were very welcome to have a look and made us self an idea of what one of the famous south tyrolien park looks like.

With the official confirmation of F-Tech I called my long-term shred Homie Lars Oesterle. I meet Lars for the first time at Garmisch at Zugspitze/ Germany in Spring 1999 while the famous GAP Camp 1328 spring camp. We became immediately friends and had fun on our boards. In 2002 we went together to Whistler BC Canada and had one of the best winters Whistler Blackcomb had ever seen. From than on we had a lot of good session together and will certainly have more in the future. THX brother!!! #parkratforlife

Long story short, Lars and me hit the road last Thursday night and started our journey to Obereggen. After having a good sleep and a comprehensive breakfast we just had to cross the street and hop into the bus who drives every 20 minutes direction to the gondola. While picking up the lift tickets I realized a poster for a benefit burger happening which was announced for Saturday. What a good cause to watch out for a tasty lunch opportunity on Saturday.

We picked up our lift tickets and after 2 chairlifts we arrived at the park base and we were hyped. Kickers and rails looked magnific. We had just to get rid of our bag packs and could start to check out the park. The stoke level was rising constantly cause not only the park was amazing although the chairlift who’s going up just offered us a great view on the main park. This makes this park really special cause you have the blessing to watch your shred homies the whole time and additionally it allows you to get sick film angles from the kicker line. Seen, realized and completed. If you want to see some park-rats having fun, have a closer look on the clip we made …

After 3 hours lapping we were ready to hang out and enjoying the sun. At the park base we found the original shaper vibe. We meet Morrison the headshaper and had a quick chat about the snow conditions, the shred audience and the south tyrolien way of life. After this we said goodbye and till tomorrow cause all our bones asked strongly for Sauna and relaxation.

Unfortunately, weather was really bad the next day, but as we made all the way to Obereggen we didn’t give a shit and went up to the park. After 3 runs on ice and sketchy landings we decided to go back to the shaper house to chat and see how people handle those kind of days in Obereggen. The park base was packed and while saying hello to everybody we were instantly invited to have a glass of white wine with the locals. While conversation we talked about commune friends, go-shred events and the motivation of the winter sport resorts in South Tyrol to push the freestyle scene. And not to forget about Spezi – das Original, sponsor of local hero Max Zebe, who grew up in this park and went to several street missions with the shapers and locals from Obereggen.

This was a wonderful trip and we can’t wait to be back. Thank you Oberegegn for having us !!!